Nelson Mandela is a hero to me. Back in 1985, in graduate school at  the University of Notre Dame, I was part of the Anti-Apartheid Network, a student group opposed to South Africa’s policy of racial separation. We were part of the international movement, largely of college students, urging divestment from firms doing business in South Africa. Mandela himself, after becoming president, said the divestment movement played a key role in bringing down the apartheid government. At Notre Dame, we used to gather every Friday at noon on the Main Building’s steps. We learned about the week’s events in South Africa from Professor Peter Walshe, a South African teaching at Notre Dame. I also became friends with Rev. Malusi Mpumlwana, a South African Anglican priest studying at Notre Dame. Malusi developed my understanding of systemic violence in ways no book could have taught me. I learned a great deal from him over endless cups of coffee and loud laughter. We students were somewhat naive, but we brought a passion to the divestment cause. It was my first experience in such a political movement and I learned a great deal about my own responsibility for those who suffer around the world. The lessons I learned from Malusi and others in the Anti-Apartheid movement guide me still. 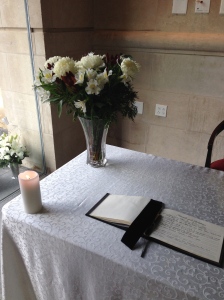 I will never forget the euphoria in our group when Mandela was released from prison in 1990. For days, the news was full of stories that Mandela might be released any day and when it finally came, I remember many of us watching together on a large television screen in Notre Dame’s e La Fortune Student Center. Many of us were in tears as we saw him walk out of the gate of the Victor Verster Prison with his fist raised in a salute.

Nelson Mandela’s life offers the world a remarkable and rare lesson. Although he suffered tremendously during twenty-seven years of imprisonment, convicted of treason in South Africa, he left the bitterness behind him. Although he saw Black South Africans suffering for centuries at the hands of minority white rule, he insisted on a country without vengeance. He helped build a country where all were free: people of all races, women and men, people of all religions, gays and lesbians. The new South African Constitution he helped create banned the death penalty and gave all minorities equal rights. He led his country humbly and firmly. He knew the Black majority deserved to punish the white minority. But he also knew such retribution would never build a free South Africa. So he insisted that such retribution and punishment be rejected. He insisted on reconciliation and forgiveness, so as to move forward, creating what he called, “the rainbow nation.”

Nelson Mandela  saw his jailers as victims of apartheid too. He knew the only way forward for his country was through forgiveness and reconciliation. Many disliked his moves after becoming president. Many wanted to punish those who led the minority-white government. But he sided with Anglican Bishop Desmond Tutu’s idea of a Truth and Reconciliation Commission. This required police, the military, and others, who committed acts of violence against the Black majority, to admit honestly what they did. Their admissions would protect them from punishment. This rare process allowed victims to learn the truth, but required that they move forward after learning that truth. This process was not universally lauded. He took great pressure but he insisted on it as the only way forward for his country.

We all know the example of his donning the South African Rugby team’s jersey shortly after becoming president. This symbolic gesture made a huge impact. The South African Rubgy team, the Springboks, was seen as the team of the white minority. The team’s players, coaches, and fans were dumbfounded when he showed them his public support. It became clear he intended to be the president of all South Africans.

Nelson Mandela was not universally committed to nonviolence. Early in his life, he was part of the African National Congress’ military wing. He was prepared for violence to free his country from minority white rule, if necessary. And for a time it looked necessary. In the end, though much violence took place in South Africa, once he left prison in 1990 and began to negotiate the new constitution, he took on the model of reconciliation as the way forward. In this, he surely spared his country much bloodshed.

He promised to only serve one term as president, so the country would move forward as a democracy. He kept that promise and though South Africa has much progress to make, he modeled the peaceful transfer of power on a continent where such transfers are too rare.

In his life as a former president, he worked hard to alleviate the suffering of those with HIV-AIDS through the Mandela Foundation. His contribution to peace, justice and reconciliation stands unmatched on his continent. His life and its unflagging work for justice stand alongside others of the 20th century like Gandhi and Martin Luther King, Jr. He offers us the rare chance to see the good in others, even when they have harmed us. This is a lesson the world desperately needs.

One thought on “Nelson Mandela’s Legacy of Forgiveness & Reconciliation”