Washington, D.C. could not produce a more perfect day. The sun was bright, the air warm but not hot or humid. And the people. I arrived at the Washington Monument with some colleagues and friends around 10am and the National Mall was already nearly full, from the Lincoln Memorial to 17th Street at the base of the Washington Monument. In the coming couple of hours it would swell and fill.

As I walked through the crowd, people were in a joyful and hopeful mood. There were contingents from the NAACP, The Urban League and countless civil rights organizations. There were union members passing out free water, sororities and fraternities from historically Black colleges, and untold numbers of regular folks like me. The crowd was a rainbow of colors, races, ethnicities, and genders. There were Gay rights organizations, environmental rights organizations, and the political parties as well. As you face the Lincoln Memorial, I walked up the right side of the Mall, along the reflecting pond. It was packed. But the crowd was full of “excuse me” and “pardon me” and “you go ahead.” This gathering was about as gracious and generous as America gets. It filled me with hope. 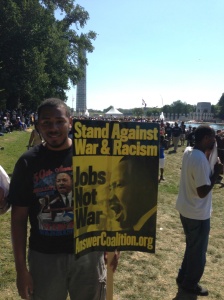 If there was a preponderance of any one message, it was remembering Trayvon Martin and calling for an end to racial profiling. The personal earthquake his death and George Zimmerman’s acquittal caused were clearly felt and expressed here. 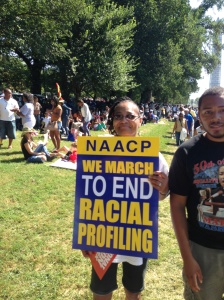 Because I was walking with some friends through the crowd, I didn’t get to hear all of the speakers. But I heard four who moved me a great deal. Donna Payne, from the Human Rights Campaign spoke with passion about the connection between GLBT rights and Civil Rights in general. I heard Myrlie Evers, the widow of Medgar Evers, speak powerfully about her husband’s vision. I heard Martin Luther King, III speak about what his father would still care about today. Most importantly, I was thrilled to hear –and see– Congressman John Lewis. I was near the VIP/Press entrance when I felt a commotion behind me and Congressman Lewis was walking right up to me with a couple of bodyguards. He walked right past me and they whisked him into the VIP area. A few minutes later he came to the podium.

John Lewis spoke at the March on Washington 50 years ago as the 23 year-old president of the Student Nonviolent Coordinating Committee. He spoke powerfully that day and he did again today, 50 years later. His remarks focused on the Supreme Court’s recent gutting of the Voting Rights Act. He reminded us that he “shed some blood on that bridge in Selma” for the right to vote. Many will recall the news film footage of a young John Lewis at the front of a line of protesters on the Edmund Pettus Bridge in Selma. The police approached him with clubs and horses and proceeded to beat him brutally. His example is a powerful one– he paid for the right to vote with his own blood and we should work hard to protect that right– especially as many states are enacting voter suppression laws at this very moment.

It’s important to recall the history of the 1963 march. The nuts and bolts organizing was done by Bayard Rustin, an openly gay, Quaker, pacifist, one of Dr. King’s close advisors. Many, including FBI director J. Edgar Hoover, threatened Dr. King that he should remove Rustin, but Dr. King and A. Phillip Randolph stood by Rustin when many wouldn’t. This year, President Obama awarded the 2013 Presidential Medal of Freedom to an inspiring group of people, including Bayard Rustin. It’s important also to recall that A. Phillip Randolph planned a March on Washington in the 1940s but when then-President Franklin Roosevelt issued an executive order banning discrimination in federal hiring, Randolph cancelled the march. In 1963, President Kennedy didn’t want the march to take place. He worried it would be violent and that violence would kill the possibility of passing the Civil Rights bill in Congress. In fact, police in D.C. fully expected the march to be violent. Yet just the opposite took place. The march was peaceful, people were gracious, singing, and in many cases, dressed up like they were going to church. The 1963 march was peaceful, to the surprise of many. The 2013 march was peaceful as well.

We do still have a dream. But many problems stand in the way of that dream. Income inequality is wider than ever; the wealthy are more wealthy and the poor are more poor than at anytime in our history. Racial profiling seems present in most American cities. We imprison a higher percentage of our population than any country in the world. Drones have become an ordinary part of our country’s international behavior, utterly apart from international law. Where much is right and beautiful about America, there is much that needs reform and renewal.

The 50th Anniversary of the March on Washington felt, to me, like a hinge moment. We look back and remember the lives and witnesses of so many who spoke that day. But we also look to the present and the future as there is much to be done in America to realize the Dream which Dr. King so eloquently imagined.

(All photos in the post taken by J. Ross)